Early settlers in Minnesota, Michigan and the Dakotas had difficulty finding apple trees that would survive the rigorous mid-west winters. So in the 1870s, the US Department of Agriculture imported numerous varieties from Russia. Among them was the Yellow Transparent which became a favourite for its high quality, scab-free and early ripening apples and of course, its winter hardiness. One of the earliest summer apples, Yellow Transparent has a pale yellow translucent skin. Its white flesh has a light texture and is very crisp and juicy and has a sweet/tart flavour. It is a popular choice for apple sauce and also makes great pies. 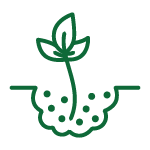